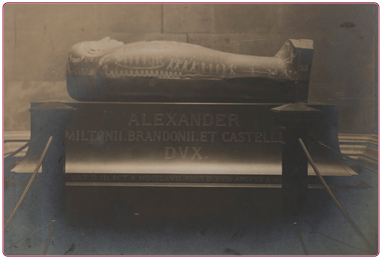 As a young man, he spent some years on the Continent studying the arts and this was a passion which stayed with him throughout his life. He was a great art collector, and filled the Palace with collections of international importance.

Before succeeding to the dukedom, he was Lord Lieutenant of Lanarkshire, Colonel of the Militia, and MP for Lancaster.  He was later appointed Ambassador to Russia, and travelled extensively in Russia and Poland.

His mausoleum was incomplete at the time of his death in 1852, but, nevertheless, his body was embalmed and placed within an Egyptian sarcophagus in the unfinished chapel.