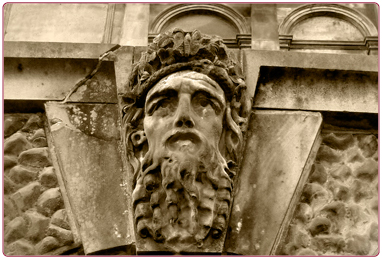 Hamilton Mausoleum was once described as '...the most costly and magnificent temple for the reception of the dead in the world - except for the Pyramids'.

Standing at 36.5m (120ft) high, its scale hints at the lost landscape and grandeur of Hamilton Palace and Estate.

The Mausoleum was built by Alexander, 10th Duke of Hamilton, nicknamed 'El Magnifico'. The Duke was very proud of his family line, which could be traced back six hundred years and was descended from royalty. He had firm ideas about the grand tomb which he wanted for himself, his ancestors and other members of the family.

It took around 15 years and different designs by four architects before Alexander achieved his desire.

David Hamilton, the leading Glasgow architect, who had previously worked on Hamilton Palace, began the work in 1845 on the foundations and crypt.  In 1848, the Duke appointed the distinguished Edinburgh architect, David Bryce, to continue, but a small surviving sketch by the Duke himself reveals how much he influenced the final design.

The interior is richly decorated, with a beautiful mosaic floor comprised of marble from around the world. The bronze doors to the chapel replicate the famous Baptistery doors in Florence, masterpieces of the Italian Renaissance. Alexander Handyside Ritchie created the famous lions, two beautiful stone sculptures which guard the entrance to the crypt. The massive dome produced a spectacular 15 second echo, which made the interior unsuitable for its original purpose as a chapel.

In 1852, the Duke moved the bodies of his ancestors from the ruins of the old Collegiate Church close by the Palace into the Mausoleum crypt. Alexander died later that same year and was laid to rest in an Egyptian sarcophagus placed on the black marble plinth in the chapel.

By the 1920s, there were fears that mining subsidence from Hamilton Palace Colliery  would damage the Mausoleum. As a result, the bodies were removed and reburied in Bent Cemetery in Hamilton, including Alexander in his splendid Egyptian sarcophagus, where they lie to this day.