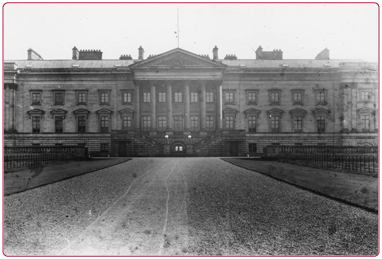 Hamilton Palace was the largest and finest non-royal residence in Britain. Its destruction, and dispersal of its art collections, is regarded as one of the greatest losses to our national heritage.

The town of Hamilton takes its name from the powerful and illustrious Hamilton family. The Duke of Hamilton is still the premier peer of Scotland.

Hamilton Palace was the family seat from at least 1591 until 1919. The Palace stood in the Low Parks of the Hamilton estate, in the area now occupied by the Palace Sports Grounds. It was demolished in the 1920s, as a result of mining subsidence.

There are references to an earlier Hamilton residence known as The Orchard. This may have been a tower house close to the site of the later Palace. However, in 1549, James Hamilton began building a new house. It was built to reflect his status as Regent of Scotland during the minority of Mary, Queen of Scots. In 1579, this "palace" and Hamilton  town and castle were burnt and demolished during a siege by Mary's enemies. The town seems to have recovered fairly quickly. A 1591 date-stone provides evidence of when Lord John Hamilton had begun building the new Palace in Clyde meadows.

In 1684, the 3rd Duke and Duchess of Hamilton began their "Great Design". This was a major rebuilding programme, which was to turn Hamilton Palace into the largest country house in Scotland. The new south front was the crowning glory. It included a stunning entrance portico in a style never before seen in Scotland.

The Palace reached its heyday in the time of Alexander, 10th Duke of Hamilton. His residence provided an appropriate setting for his famed art collection and reflected his family's proud history and status.

The Palace was then massively enlarged and enhanced. Work began in 1822 on a new north front, a servants' wing, and additional offices and stables. This was designed by David Hamilton, Glasgow's leading architect of the time.

The interior was in keeping with the grandeur of the exterior. The huge apartments were crammed with paintings, statues, furniture and art treasures from around the world. It was enjoyed throughout Victorian times by a who's who of British and European nobility, celebrities and socialites.

This golden age was not to last. The programmes of rebuilding and art collecting by the 10th Duke and his successors led to mounting debts. This put a strain on the estates. A major sale of the Palace art treasures took place in 1882 at Christies auctioneers in London. This raised the huge sum of £400,000, the equivalent of around £24 million today.

After the sale, the Hamilton family spent very little time in the Palace. In 1919 they moved to Dungavel House, their hunting lodge near Strathaven.

It was coal-mining which finally brought about the destruction of Hamilton Palace. The Hamilton family had been leasing out mineral rights in the Palace Grounds since 1882. By 1915 mining was threatening the stability of the Palace. In 1919 the colliery company was asked to give up its lease, but they refused, sealing the Palace's fate.

The building was sold to demolition contractors in 1921. It took around 8 years to completely demolish. During this time the west wing was temporarily converted into houses for homeless miners' families. The Palace Grounds now contain a retail park and sports complex.

The Palace itself is gone, and its art treasures now in major museums, galleries and private collections around the world. However, the Mausoleum, Chatelherault hunting lodge, and the ducal buildings that make up Low Parks Museum remain. They provide a reminder of the glory that once was Hamilton Palace.