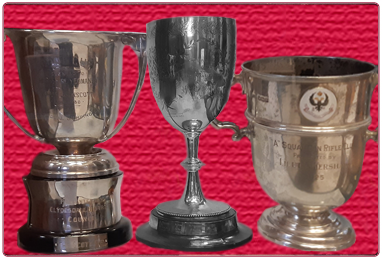 Yeomanry regiments were volunteer cavalry raised in the 1790s, when Britain was at war with revolutionary France. Lanarkshire would not have a civil police force until 1857, so local troops were raised by Sir Norman Lockhart of Lee in 1819 at Carnwath and Douglas, and at Lesmahagow in 1821 by Daniel Vere of Stonebyres. Five Lanarkshire units eventually became the Lanarkshire Regiment of Yeomanry Cavalry in 1848.

The Regiment held its annual review, race and sports meet and training at Lanark Moor racecourse.

The three cups are: